of Indigenous Australians aged 15 and over who had consulted a doctor in the last 12 months, reported discussing lifestyle issues in 2018–19

of all clinical and therapeutic treatments provided by general practitioners to Indigenous patients, related to health promotion in 2010–2015

Per person expenditure on selected health promotion services, by state and territory governments, was almost twice as much for Aboriginal and Torres Strait Islander people as it was for non-Indigenous Australians in 2015-16

Health promotion is the process of enabling people to increase control over their health and its determinants, and thereby improve their health (WHO 2008). Health promotion activities are designed to improve or protect health within social, physical, economic and political contexts. Health promotion includes public policy interventions (e.g., packaging of tobacco products and seat belt laws), information to support healthy lifestyles (e.g., smoking, alcohol and drug use, physical activity and diet), social marketing (e.g., sunscreen and safe sex) and mass media campaigns (e.g., drink-driving and road safety). Health promotion also includes empowering individuals, strengthening community capacity and addressing determinants of health. It embraces not only actions directed at strengthening the skills and capabilities of individuals but also actions directed towards changing social, environmental and economic conditions to alleviate their impact on public and individual health (WHO 2008).

Currently there are limited methods for measuring the nature, level, and reach of health promotion programs and activities. Lifestyle issues discussed with a doctor

The 2018–19 National Aboriginal and Torres Strait Islander Health Survey showed that 47% of Indigenous Australians aged 15 and over who had consulted a doctor in the last 12 months reported discussing lifestyle issues. These included reaching a healthy weight (48%), eating healthy food or improving their diet (42%), reducing or quitting smoking (37%), increasing physical activity (32%), drinking alcohol in moderation (16%), safe sexual practices (10%) and family planning (8%) and drug use (4%) (Table D3.03.3).

Figure 3.03.2: Whether discussed health lifestyle issues with doctor or health professional, Indigenous Australians aged 15 years and over, by sex, 2018–19 Figure 3.03.3: Proportion of Indigenous Australians aged 15 and over who discussed lifestyle issues with a doctor or health professional in last 12 months, by remoteness, 2018–19 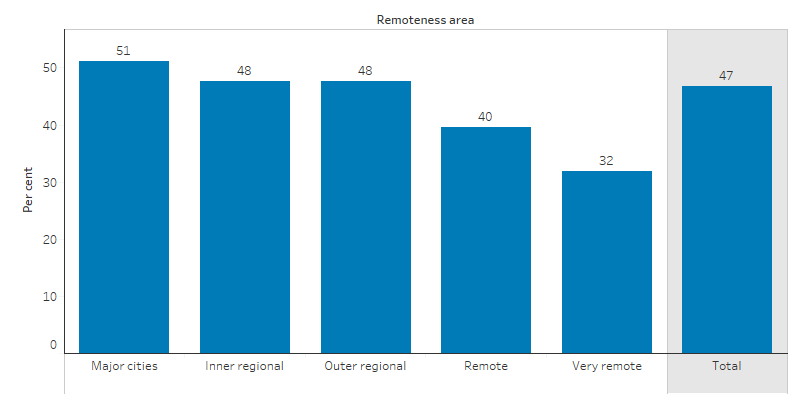 Almost all (96%) of these organisations also provided group activities. These included the promotion of physical activity/healthy weight activities (70%), living skills (such as cooking and nutrition groups) (66%), substance-specific activities for tobacco (65%), alcohol treatment/prevention (38%) and maternal and baby/child health groups (49%) (Table D3.03.10).

Evidence on the effectiveness of health promotion is mixed across a range of settings and disease types with some approaches being more effective than others for different population groups (Davidson et al. 2014; Jackson & Waters 2005; Liu et al. 2012; Schloemer & Schröder-Bäck 2018). Approaches include adapting interventions to increase relevance, cultural acceptability and uptake. However, there is still insufficient evidence on the clinical effectiveness or cost-effectiveness of adapted interventions. Research highlights that more comparisons are needed between adapted and standard interventions (Liu et al. 2012).

A small study of urban Indigenous young people found no change in behaviours but some change in knowledge and attitudes following health promotion interventions in school (Malseed et al. 2014).

A recent small study of a remote Indigenous community in North-Eastern Arnhem Land highlighted that policy initiatives that address social and economic disadvantage are needed alongside community-led health promotion initiatives (Strate K 2020). The study followed a three-year period of community-led health promotion initiatives. It found that there may have been some benefits to chronic conditions risk factors, including stabilisation of body composition and increase in good HDL cholesterol. However, there were less favourable trends for diabetes and total cholesterol, and smoking rates remained high (Strate K 2020).

One study highlighted the need for a social determinants lens to be considered when planning and implementing Aboriginal health promotion programs (Vallesi et al. 2018).

A recent study in remote communities in Central Australia aimed to identify culturally-led behaviours and attitudes that present obstacles to the effectiveness of health promotion messages on trachoma prevention. These obstacles can hamper the responsiveness to guidance on facial cleanliness, for some people living in communities vulnerable to trachoma. The study suggested the following approaches: case management that encourages and supports individual families to focus on washing that is necessary for eye health; information campaigns that encourage people to separate the need for facial cleanliness from the way in which people prefer to present themselves; and engaging messages on trachoma prevention that focus on positive empowerment (Abbott 2020).

There is limited evaluation evidence on the effectiveness of Indigenous specific health promotion programs particularly in terms of lasting impact on health outcomes.

A literature review found that while Indigenous health promotion tools were widely available, only 15% had been evaluated, and only half of these evaluations were considered comprehensive (McCalman et al. 2014). From those comprehensive evaluations, programs that were found to be more successful had allowed local communities to determine the end product by asking them what type of health promotion they would like, on what topic and how they would like it delivered (Malseed et al. 2014; Schoen et al. 2010).

The Western Australian Government Strong Spirits, Strong Minds media campaign, aims to raise awareness of the harms associated with alcohol and other drug issues among Aboriginal people, families and communities in the Perth Metropolitan area. Evaluation results indicate that it is a highly effective and successful strategy. Aboriginal young people were more aware of how to obtain help from alcohol and other drug services after being exposed to the campaign (Mental Health Commission 2016).

Not all health campaigns are effective. Factors that influence health behaviour and health behaviour change among Indigenous Australians are complex and poorly understood (Waterworth et al. 2015). Social media may be a useful strategy to provide health messages and content among Indigenous Australians, but the effects on health need to be further investigated (Hefler et al. 2018; Walker et al. 2019). More research also needs to be undertaken into the usefulness and effectiveness of using a social determinants lens when planning and implementing Indigenous-specific health promotion programs.

Features of effective health promotion interventions for Indigenous communities include involving local Indigenous people in the design and implementation of programs; acknowledging different drivers that motivate individuals; building effective partnerships between community members and the organisations involved; cultural understanding and mechanisms for effective feedback to individuals and families; and developing trusting relationships, community ownership and support for interventions (Black 2007). Family-centred approaches across the life course have also been recommended in the prevention of chronic disease (Griew et al. 2007).